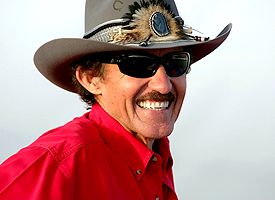 There are some classic quotes from Petty on meeting the Queen like the one below.

If I meet the Queen, it’ll probably be a nod and that’s about as far as it’ll go,” Petty said on Friday at Richmond International Raceway. “I don’t know if I could talk to her because I don’t speak English. I speak Southern American, and I don’t know if she would understand that or not.

He’ll wear the same familiar cowboy hat to the Derby — black with a peacock feather in the front — that he wears to the race.

“She wears one of them great big hats,” Petty said of the Queen. “She might outdo me on the hat deal.”

Asked how he’ll act in front of the Queen, Petty laughed and said, “I’ve got a queen at home that I have to act to. The rest of them don’t make a whole lot of difference.”

Just classic.  For the record, respecting cultures implies all of them.